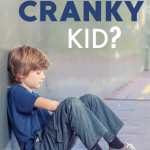 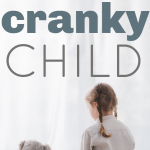 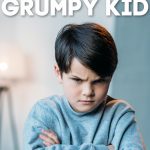 Do you have a grumpy kid? Try these two tips to get them back on the right track. No one likes a cranky child.

My son is a happy kid, but naturally argumentative and pessimistic.  I love him to death; however, sometimes it really gets me down.

I tried everything to stop this behavior.  I sat patiently while he complained about dinner, showering, homework, and whatever else he was doing for the day.  I tried stopping him before he could say anything and pointing out when he is doing this behavior so he could identify and work on stopping it.

I spent a lot of time arguing with him about the things he would say.  None of these really worked for us.

How I can help my grumpy kid to stop being grumpy.

We decided it was best to adjust everyone’s bedtime so it would not look like we were just lowering his.  We moved it to 7:45.  This was hard to hear for a 6 year old.  Of course, with his personality, he argued about this for days.

The first week was tough.  Moving the bed time up meant that we had to accomplish more in less time.  We ate at 5:30. And I would have to sometimes start dinner an hour after they got home from school.  We had to get homework in, baths, and bedtime stories before 7:45.

Once we got them to bed and tucked in they would just lay there.   They could not fall asleep that early.  We did buy a sound machine and that helped.  This is the one we have.  Sometimes they would be in bed over an hour complaining they weren’t tired.  I was getting really frustrated.  Slowly, they started to fall asleep earlier and earlier.

I noticed after a few weeks that not just my grumpy child was in a better mood, they all were.  They were still getting up around the same time and they were getting more sleep.

I noticed that when they got home from school, they did not complain about their homework as much, they listened better and weren’t as argumentative.  My sons personality will never change, but this has helped him so much!  He is happier.  I never thought that giving him 45 more minutes of sleep a night would mean such a change in his behavior.

Take away screens. Easier said than done, right? I have cranky kids when my kids are on screens!

I thought putting them to bed early was hard, this was much worse. Here are two of the biggest ways you can reduce screen time.

Here are some activites you can do instead of screen time, if you need help finding soemthing for your kids to do.

Thanks for your great parenting posts! It seems so intuitive too, right? More sleep = happier child. Same goes for us adults as well, doesn't it? I particularly liked your other post on stopping your child from whining. I use the same method for my younger son who is a chronic whiner about candy and television. Oh boy, does the whining work your last nerve, but like you, what I have found most effective is to stop and look at them and listen. Ignoring it does not resolve it.

we started my son on melatonin and that has helped a lot too. he even told me he feels better - hes getting BETTER SLEEP in general, in addition to being able to fall asleep sooner. its not a complete problem solver, but its certainly an improvement on the hours of fighting that used to happen at bedtime and for the next 3 hours.

It's amazing what a little sleep can do! I can see it with both my kids -- one who is less optimistic about life and the other who's always happy -- with just a little extra sleep, the day always runs smoother.

I keep seeing this, and I'd love to do it. But, we have three boys who are 11, 9, & 6. They all play baseball, and if they play the second game (there are two games a night Mon-Fri), it doesn't START til 7:00/7:30, then they need a shower when we get home. During the school year, the oldest plays volleyball & basketball in season. Again, not getting home til 9ish some nights. And I have to go to the games since my husband's day starts at 5am and he's in bed by no later than 9. But baseball is over in three weeks & we'll have the rest of the summer to see how well this works.

Wow...sometimes I get so analytical, I skip the obvious. I have tracked food (he does have allergies) and supplements and everything else but i have not looked at the correlation to his moods and sleep! Thank you so much for helping me see the forest for the trees :)

That sounds exactly like me!! I kept a food log for him. We went dairy free, gluten free, egg free, and dye free (all at different times) to see if anything helped. This worked!